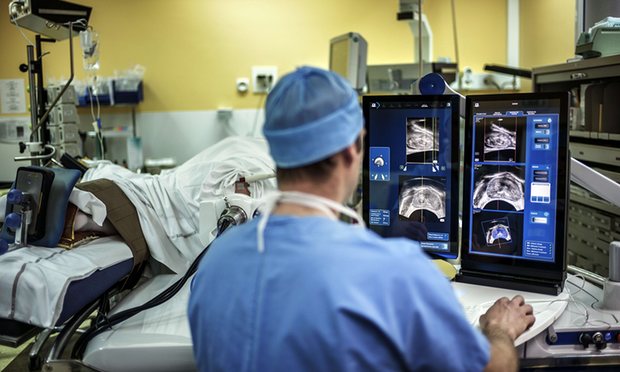 British doctors are developing a revolutionary new therapy for cancer and associated conditions based on the use of high-powered beams of ultrasound.

The researchers – working at the Institute of Cancer Research (ICR), at the Royal Marsden hospital in Sutton, outside London – have already used the technology to kill harmful tissue deep inside the bodies of patients suffering from metastatic bone lesions – without recourse to any form of surgery. And in future, doctors believe they will also use ultrasound to zap prostate, breast and other tumours. “This technology has immense potential,” said Professor Gail ter Haar, who is based at the institute.

An example of the technology’s power is provided by Moira Baker (not her real name), a 52-year-old former teacher who lives in Kew, London. Two years ago she was diagnosed with breast cancer. Shortly afterwards she was also found to have bone lesions caused by the metastatic spread of her cancer. Baker received chemotherapy that has left her in remission for her condition. However, her bone lesions continued to cause considerable pain which standard treatments, including radiotherapy, failed to alleviate. So she was selected to be treated with ultrasound to blast the cells in her bones that were triggering her pain.

“It transformed my life,” Baker told the Observer. “Stretching an arm or dressing was excruciatingly painful. After ultrasound, I was much better. I now have a normal life again.”

“The technology is completely noninvasive and allows us to monitor changes we are making inside a person instantly,” said Thomas Andreae, therapy director at Philips, which is collaborating with the ICR on the project. “It has all sorts of possible applications.”

Ultrasound involves using sound waves with frequencies above the audible limit for humans. At low power, ultrasound can be used to generate images of internal organs or foetuses growing in the womb. However, at very high energies, it can destroy tissue. Such beams, which are typically 10,000 more powerful than those used in pregnancy scans, cause cells to heat up and die. “When we pick a target tissue to kill off, we need to heat it up to about 55C for at least a second. That is enough to kill it off,” said Ter Haar. “Crucially, we can do that with ultrasound. More importantly we can do it at places that are deep inside an organ – while leaving tissue on the surface unaffected.”

Guidance for the ultrasound beams is provided by magnetic resonance scanners that can focus the beams with millimetre precision ensuring only cancerous or damaged tissue is targeted. Healthy tissue is protected. The scanners also monitor the temperature of target cells to ensure they have been heated enough to kill them.

Researchers are currently concentrating on the use of Hifu for patients with bone lesions linked to cancer. “These are patients who have got nothing else to fall back on,” said Professor Nandita DeSouza, another ICR researcher working on the Hifu project. “They have no other options available to control the terrible pain they can experience.” So far eight metastatic bone cancer patients have been treated this way. “All have responded very well,” added DeSouza. “The pain relief was instant.”

However, in the near future doctors expect to expand the range of targets that Hifu can tackle. Once they have perfected the use of ultrasound, they believe it could be used to heat up tumour cells and kill them. Neighbouring healthy tissue would be unaffected because of the precise targeting the Hifu devices can now achieve. One example is provided by prostate cancer, which could be treated using probes, directed by MRI scanners, that could channel ultrasound to specific tumour sites. It is hoped breast cancer could also be treated this way.

In addition, doctors believe that they could inject lipid capsules containing powerful anti-cancer drugs into patients’ bloodstreams. These would circulate until they reached the sites of their tumours.

“We would then use ultrasound to heat up those tumours, causing the lipid capsules to melt and release their anti-cancer drug contents – directly on to the tumour,” said Andreae. “That would be a very powerful addition to our arsenal of cancer treatments in future.”